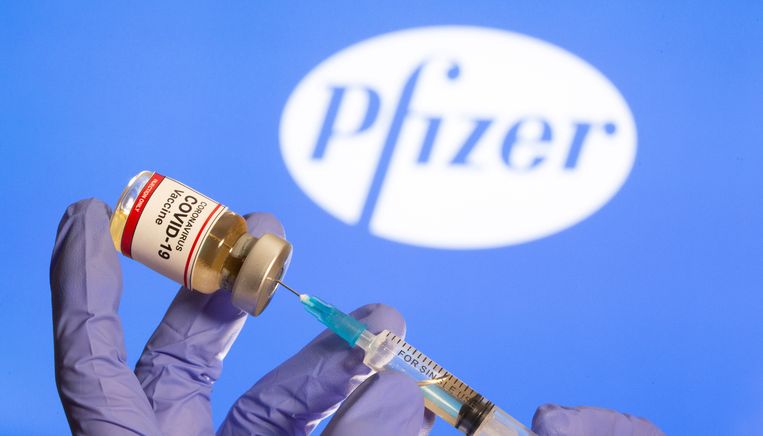 Severe allergy-like reactions in at least eight people who received the COVID-19 vaccine produced by Pfizer and BioNTech over the past 2 weeks may be due to a compound in the packaging of the messenger RNA (mRNA) that forms the vaccine’s main ingredient, scientists say. A similar mRNA vaccine developed by Moderna, which was authorized for emergency use in the United States on Friday, also contains the compound, polyethylene glycol (PEG).

PEG has never been used before in an approved vaccine, but it is found in many drugs that have occasionally triggered anaphylaxis—a potentially life-threatening reaction that can cause rashes, a plummeting blood pressure, shortness of breath, and a fast heartbeat. Some allergists and immunologists believe a small number of people previously exposed to PEG may have high levels of antibodies against PEG, putting them at risk of an anaphylactic reaction to the vaccine.

Others are skeptical of the link. Still, the U.S. National Institute of Allergy and Infectious Diseases (NIAID) was concerned enough to convene several meetings last week to discuss the allergic reactions with representatives of Pfizer and Moderna, independent scientists and physicians, and the Food and Drug Administration (FDA).

NIAID is also setting up a study in collaboration with FDA to analyze the response to the vaccine in people who have high levels of anti-PEG antibodies or have experienced severe allergic responses to drugs or vaccines before. “Until we know there is truly a PEG story, we need to be very careful in talking about that as a done deal,” says Alkis Togias, branch chief of allergy, asthma, and airway biology at NIAID.

Pfizer, too, says it is “actively seeking follow-up.” A statement emailed to Science noted it already recommends that “appropriate medical treatment and supervision should always be readily available” in case a vaccinee develops anaphylaxis.

Anaphylactic reactions can occur with any vaccine, but are usually extremely rare—about one per 1 million doses. As of 19 December, the United States had seen six cases of anaphylaxis among 272,001 people who received the COVID-19 vaccine, according to a recent presentation by Thomas Clark of the U.S. Centers for Disease Control and Prevention (CDC); the United Kingdom has recorded two. Because the Pfizer and Moderna mRNA vaccines use a new platform, the reactions call for careful scrutiny, says Elizabeth Phillips, a drug hypersensitivity researcher at Vanderbilt University Medical Center who attended an NIAID meeting on 16 December. “This is new.”

News reports about the allergic reactions have already created anxiety. “Patients with severe allergies in the US are getting nervous about the possibility that they may not be able to get vaccinated, at least with those two vaccines,” Togias wrote in an invitation to meeting participants. “Allergies in general are so common in the population that this could create a resistance against the vaccines in the population,” adds Janos Szebeni, an immunologist at Semmelweis University in Budapest, Hungary, who has long studied hypersensitivity reactions to PEG and who also attended the 16 December gathering.

Scientists who believe PEG may be the culprit stress that vaccination should continue. “We need to get vaccinated,” Phillips says. “We need to try and curtail this pandemic.” But more data are urgently needed, she adds: “These next couple of weeks in the U.S. are going to be extremely important for defining what to do next.”

Pfizer’s and Moderna’s clinical trials of the vaccines, which involved tens of thousands of people, did not find serious adverse events caused by the vaccine. But both studies excluded people with a history of allergies to components of the COVID-19 vaccines; Pfizer also excluded those who previously had a severe adverse reaction from any vaccine. People with previous allergic reactions to food or drugs were not excluded, but may have been underrepresented.

The two vaccines both contain mRNA wrapped in lipid nanoparticles (LNPs) that help carry it to human cells but also act as an adjuvant, a vaccine ingredient that bolsters the immune response. The LNPs are “PEGylated”—chemically attached to PEG molecules that cover the outside of the particles and increase their stability and life span.

PEGs are also used in everyday products such as toothpaste and shampoo as thickeners, solvents, softeners, and moisture carriers, and they’ve been used as a laxative for decades. An increasing number of biopharmaceuticals include PEGylated compounds as well.

PEGs were long thought to be biologically inert, but a growing body of evidence suggests they are not. As much as 72% of people have at least some antibodies against PEGs, according to a 2016 study led by Samuel Lai, a pharmaco-engineer at the University of North Carolina, Chapel Hill, presumably as a result of exposure to cosmetics and pharmaceuticals. About 7% have a level that may be high enough to predispose them to anaphylactic reactions, he found. Other studies have also found antibodies against PEG, but at lower levels.

“Some companies have dropped PEGylated products from their pipeline as a result,” Lai says. But he notes that the safety record of many PEGylated drugs has persuaded others that “concerns about anti-PEG antibodies are overstated.”

Szebeni says the mechanism behind PEG-conjugated anaphylaxis is relatively unknown because it does not involve immunoglobulin E (IgE), the antibody type that causes classical allergic reactions. (That’s why he prefers to call them “anaphylactoid” reactions.) Instead, PEG triggers two other classes of antibodies, immunoglobulin M (IgM) and immunoglobulin G (IgG), involved in a branch of the body’s innate immunity called the complement system, which Szebeni has spent decades studying in a pig model he developed.

In 1999, while working at the Walter Reed Army Institute of Research, Szebeni described a new type of drug-induced reaction he dubbed complement activation-related pseudoallergy (CARPA), a nonspecific immune response to nanoparticle-based medicines, often PEGylated, that are mistakenly recognized by the immune system as viruses.

Szebeni believes CARPA explains the severe anaphylactoid reactions some PEGylated drugs are occasionally known to cause, including cancer blockbuster Doxil. A team assembled by Bruce Sullenger, a surgeon at Duke University, experienced similar issues with an experimental anticoagulant containing PEGylated RNA. The team had to halt a phase III trial in 2014 after about 0.6% of 1600 people who received the drug had severe allergic responses and one participant died. “That stopped the trial,” Sullenger says. The team found that every participant with an anaphylaxis had high levels of anti-PEG IgG. But some with no adverse reaction had high levels as well, Sullenger adds. “So, it is not sufficient to just have these antibodies.”

Until we know there is truly a PEG story, we need to be very careful in talking about that as a done deal

At the NIAID meeting, several attendees stressed that PEGylated nanoparticles may cause problems through a mechanism other than CARPA. Just last month, Phillips and scientists at FDA and other institutions published a paper showing patients who suffered an anaphylactic reaction to PEGylated drugs did have IgE antibodies to PEG after all, suggesting those may be involved, rather than IgG and IgM.

Other scientists, meanwhile, are not convinced PEG is involved at all. “There is a lot of exaggeration when it comes to the risk of PEGs and CARPA,” says Moein Moghimi, a nanomedicine researcher at Newcastle University who suspects a more conventional mechanism is causing the reactions. “You are technically delivering an adjuvant at the injection site to excite the local immune system. It happens that some people get too much excitement, because they have a relatively high number of local immune cells.”

Others note the amount of PEG in the mRNA vaccines is orders of magnitude lower than in most PEGylated drugs. And whereas those drugs are often given intravenously, the two COVID-19 vaccines are injected into a muscle, which leads to a delayed exposure and a much lower level of PEG in the blood, where most anti-PEG antibodies are.

Nevertheless, the companies were aware of the risk. In a stock market prospectus filed on 6 December 2018, Moderna acknowledged the possibility of “reactions to the PEG from some lipids or PEG otherwise associated with the LNP.” And in a September paper, BioNTech researchers proposed an alternative to PEG for therapeutic mRNA delivery, noting: “The PEGylation of nanoparticles can also have substantial disadvantages concerning activity and safety.’”

Katalin Karikó, a senior vice president at BioNTech who co-invented the mRNA technology underlying both vaccines, says she discussed with Szebeni whether PEG in the vaccine could be an issue. (The two know each other well; both are Hungarian and in the 1980s, Karikó taught Szebeni how to make liposomes in her lab.) They agreed that given the low amount of lipid and the intramuscular administration, the risk was negligible.

Karikó emphasizes that based on what we know so far, the risk is still low. “All vaccines carry some risk. But the benefit of the vaccine outweighs the risk,” she says.

Szebeni agrees, but says he hopes that’s also true in the long run. He notes that both mRNA vaccines require two shots, and he worries anti-PEG antibodies triggered by the first shot could increase the risk of an allergic reaction to the second or to PEGylated drugs.

To understand the risk, Phillips says, it’s crucial to unravel the mechanisms underlying the immune reactions and find out how often they are likely to occur. The known U.S. cases are currently under study, but key clues may have vanished: Anaphylactic reactions produce biomarkers that only remain in the blood for a few hours. At the NIAID meeting, participants discussed ways to ensure that blood samples from future cases are taken immediately and tested for those markers.

If PEG does turn out to be the culprit, the question is, what can be done? Screening millions of people for anti-PEG antibodies before they are vaccinated is not feasible. Instead, CDC guidelines recommend not giving the Pfizer or Moderna vaccines to anyone with a history of severe allergic reaction to any component of the vaccine. For people who have had a severe reaction to another vaccine or injectable medication, the risks and benefits of vaccination should be carefully weighed, CDC says. And people who might be at high risk of an anaphylactic reaction should stay at the vaccination site for 30 minutes after their shot so they can be treated if necessary.