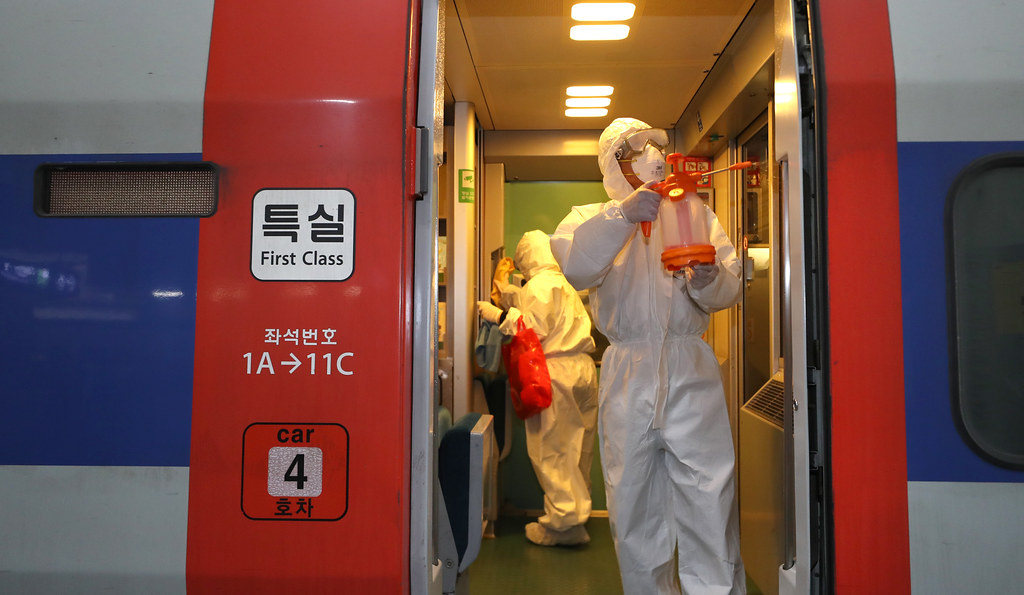 Should western countries adopt the approach of countries like South Korea? Or is their success too particular or even temporary? The ‘Korean Dr. Fauci’ Woo-Joo Kim explains his country’s strategy, its strengths and its weaknesses. And he shows his marvel about some of the western measures – or lack of them.

The international press has lauded the Korean approach of the novel coronavirus, based on mask wearing, mass testing, strict isolation and quarantine measures and no school, bar or other closures except for large meetings. After a first large outbreak in a church community called Shincheonji, the number of cases and in particular deaths has remained relatively low: as of March 30th the latter is 152.

The Korean approach is very different from what most Western countries, at least initially have done to battle the virus: mass testing and systematic contact tracing was quickly abandoned for the most part, social distancing measures have been taken not to stop but to slow the spread of the virus so that, hopefully, the hospitals would not be flooded.

That western approach, as another Asian expert, Daxin Ni of the Chinese CDC has pointed out, seems to be rooted in protocols for a flu pandemic – cause that’s what they were expecting. Influenza, because of its properties, cannot be contained. But COVID-19 is not like influenza and, as countries like Singapore, Taiwan and South Korea seem to show so far, it seems possible to contain it by applying what Daxin Ni called a SARS-like approach, aimed to contain the virus. Western countries such as the US and Germany and line by line, the Netherlands as well, are starting to appreciate and even copy bits of this approach, as a way out of the current lock down measures.

I talked about it on the phone with one of the leading experts in South Korea, also known as ‘the Korean Dr. Fauci. As president of the Korean Society of Infectious Diseases,Professor Woo-Joo Kim as influential in his country and does not fear to criticize his goverment’s coronavirus strategy either. The infectious disease professor of Korea University explains its strengths and its weaknesses and he shows his marvel about some of the western measures – or lack of them.

Was the Korean approach indeed based on the SARS approach developed in 2003?

Well we have learned lessons from another coronavirus, MERS, which broke out in 2015. This has made us put a lot of infection control and public health measures in place. We could not just copy the MERS approach now. MERS was very deadly, around 20 percent in our country, but it spread mostly in hospital settings, therefore it was more easily controlled. COVID-19 spreads more easily, especially in family members or closed settings, churches, nursing homes. That’s why it is not easy to contain.

What is the current situation in Korea?
Many foreign countries applauded the Korean approach. But I don’t fully agree. In February, we had an outbreak in the church community, Shincheonji, with more than 5000 cases. We failed to control the outbreak in that area. We produced a lot of testing kits. That was a good thing. Otherwise I am not so happy with our government. Now we controlled it, but there is some outbreak in long term care facilities and nursing homes with a high case fatality rate. Every day we have newly confirmed cases, around 100, most of them imported from Europe and North America. This makes me worry about a potential second outbreak in metropolitan Seoul. So we are very cautious, not complacent.

The borders have not been closed?
No, I recommended it to the government but our government has been very generous towards travelers. Still, we have many foreign people arriving. Flights come in from Europe and North America and 80% of the people arriving are foreigners. At the international airport, there is a quarantine office where they symptomatic people. Those tested positive are ordered to self isolate for 14 days. Originally, the government planned to test all incoming passengers from Europe and North America. But this would mean over 1.000 tests every day, so the government decided it was not feasible.

Why don’t they test every incoming passenger? They have the capacity, right?

Yes, I recommended testing all European and North American incoming passengers. But it would take about a day for passengers to get their result. I recommended to introduce a point of care test which could deliver the result within an hour, but this machine has not been approved yet in Korea.

How does contact tracing work in Korea? Is it still being done for all cases?
The Korean CDC sends epidemiological investigators to identify confirmed cases and contact trace for outbreak clusters. For individual cases, the municipal health center does the job. They still try to contact trace and isolate people who have been in contact with the infected person up to two days before symptom onset in home quarantine for two weeks and if symptom arises, they test them. The process is very labor intensive, it takes many days. But it is important: some people didn’t follow the home quarantine order and traveled to another area, where they caused new outbreaks.

I don’t know now exactly. The Korean government announced the critical stage of health emergency on February 23rd. Then a highly increased number of people with a healthcare background were recruited. Police officers also help to trace close contacts. They built a system with video monitoring, to see close contacts, they had this experience from the MERS outbreak. That helped us a lot this time.

What is being done with people who tested positive?
Public health officials evaluate the severity of the disease. With fever they are hospitalized in designated hospitals. For people with mild symptoms, the Korean government has established residential treatment centers. These are no hospitals. Many companies have their own education centers and the government recruited these. Residential treatment centers. In these centers are up to 200 mild covid cases. Mostly for 2-3 weeks. When they develop severe symptoms they are transferred to a hospital. When they have no symptoms and test negative twice in 48 hours they are discharged can go home. For close contacts of positive cases, the Korean CDC developed a self quarantine smartphone application. They are ordered to go into home quarantine for two weeks and will be monitored through the app. GPS is used to check if they are still in their house.

And what if they will leave the house without smartphone? Or would a Korean never do that?

Yes that is a weak point, they could leave the house with a different phone, but they risk being fined. The penalty is 3 million Korean Won, almost 2500 dollar, altough it has so far not been enforced strongly.

What do you think of the Dutch isolation policy: home isolation with family, without even being tested in many cases?
Hmm, that is not good, you get family clusters. And they can still go shopping? Hmm…

Look. This is not pandemic flu. Many in the West thought it would be finished by herd immunty. . It is a mistake to aim at that. COVID-19 has a very similar clinical manifestation in healthy people as flu. Symptomatically you cannot differentiate – but the difference is the high mortality in elderly and people with other conditions.

So which patients are being treated in the ICUs? In the Netherlands it is mostly not the very old because they would not benefit from it.
During the outbreak feb-early march, the ICUs were overwhelmed. Over 1000 confirmed cases were waiting in their homes to be hospitalized. Younger people were hospitalized because they were just coming to the hospitals, they kept the elderly waiting or were brought in at the emergency room. I spoke to the government and said: “please hospitalize the elderly first.”

What about not treating the frailest patients because it would not benefit them?

This would be no option in our culture. We admire the elderly so much that we could not give up them up. Even if there would not be no bed available at the ICU we would not say it, it would be such a disgrace.

What measures would you advise us to adopt in Europe to improve our approach?

Well, with widespread community outbreak, I can imagine you go for mitigation. But it is not influenza so it would be smart to return to contact tracing and isolation if possible. We have no tamiflu, no vaccine like in 2009. We need to break the chain of transmission.

Is it possible to go back from mitigation to containment?
I think it is. We have not applied mass quarantining in Korea. We are trying to put general people to handwashing, mask wearing, social distancing. The traditional approach worked well so far. Almost every South Korean person wears a mask, that helped a lot. In particular in very crowded closed areas, like in church, in call center, public transport.

In Europe people don’t wear them a lot and even health advice often states it doesn’t help much or might increase the infection rate. Even WHO’s Mike Ryan said it this week.

I don’t understand people do not believe masks prevent infection. And I totally do not understand they do not apply them in general people. It has been proven it does prevent infection. During the 2003 SARS outbreak in Hong Kong, Taiwan and Singapore, healthcare workers got infected without masks. After they started wearing them it was reduced to almost zero. We believe masks, hand washing, even environmental cleaning helped us a lot in preventing viral spread.

That is why we recommend mask in crowded places, alongside with frequent hand washing I just do not understand why they cannot just explain it clearly so that people will do this properly.

What types of masks do you recommend?

For general people and people working in hospital offices and wards I recommend surgical masks. The more professional N95 is for high grade of infectivity, usually health care workers treating COVID-19 patients. N95 is not easy to walk when you are wearing, it has a closed fit and it’s not comfortable. Surgical masks prevent more than 80% if you wear it appropriately. ately.

Why do you think Europeans are so mask averse?

I think the real reason is they did not experience the sars and mers outbreaks. Those outbreaks taught us lessons. If you look at the graphs, you see the virus abruptly spread in countries without masks. I heard you have shortages now. Well, we have a shortage of surgical masks too, the president apologized for this and we are now allowed to buy a maximum of two per week. It has become a modern tradition: every Monday morning people are lining up in front of the shop to buy them.

Appreciate this article and my work? You can now donate and keep me busy.

If you like this article and want to show it by giving a small (or big) donation, that’ possible. This way, you’re helping independent (science) journalism to maintain and flourish.